Contemporary forms of slavery continue to be a major challenge in the 21st century. International law prohibits slavery, human trafficking and forced labour, and states are generally committed to eliminating these human rights abuses, but over 25 million people were in modern slavery on any given day in 2016 (Global Estimates of Modern Slavery). As the UN Special Rapporteur on Contemporary Forms of Slavery pointed out in her latest report to the General Assembly, the scale of the phenomenon is even larger than what statistics indicate (para. 8).

However, in some cases states are directly or indirectly involved in the commission of a modern slavery offence through their state policy or through the actions or omissions of a state organ or official. Confronting this reality and uncovering that gap is necessary in order to eliminate modern slavery (Sustainable Development Target 8.7).

The Australian Modern Slavery Act is the first legislation to include reporting obligations for the public sector. This approach has been recommended for the UK by the Independent Review of the UK Modern Slavery Act published on 22 January 2019. Although cases involving States are a small portion of the overall number of modern slavery cases, the analysis of fact patterns led us to identify 5 scenarios of State involvement in modern slavery: (1) modern slavery as state policy; (2) informal participation of state organs in modern slavery; (3) diplomatic involvement in domestic servitude; (4) state-backed labour brokerage and labour trafficking (including of domestic workers); (5) state export credit of slavery-tainted projects.

The United Nations and the International Labour Organization, among other actors, have reported on modern slavery cases committed as state policy (Scenario 1), particularly forced labour and human trafficking. One of those reported policies concerns Uzbekistan and Turkmenistan, both accused of using forced labour in the state-controlled cotton harvesting industry. Those states allegedly force national ministry employees (eg medical professionals, teachers), as well as students, to participate in cotton picking under quota systems and menace of penalty. In November 2018, ILO monitors reported on positive developments in Uzbekistan concerning child labour. But the recruitment of staff from public institutions, agencies and enterprises still occurs in some places. These allegations of forced labour in the cotton industry occur while Uzbekistan enjoys preferential import tariffs under the EU Generalised Scheme of Preferences and is negotiating with the European External Action Service a new and more beneficial agreement.

Another example of alleged modern slavery as state policy involves the DPRK government, accused of human trafficking of its own nationals for forced labour (2018 US TIP Report). It allegedly engages in bilateral contracts with foreign governments for the purpose of trafficking DPRK nationals to work overseas in fishing, construction or textile industries. Some of the reported receiving countries include Russia, China, Mongolia, Kuwait, UAE, Qatar, Angola or Poland. The DPRK supposedly profits from the remittances of such workers. In November 2018, a North Korean worker filed a criminal complaint against a Dutch shipbuilding company that allegedly profited from the abuse of workers in its supply chain in Poland (GLAN). The case, which targets labour exploitation in supply chains, encourages considerations on the role of receiving States in this context.

As for Scenario 2 (Informal participation of State organs in modern slavery), there is evidence of the active participation or cooperation of public officials in the smuggling and exploitation of migrants by private companies, and in the deployment of forced labour at the local and national levels. The ILO has reported on the involvement of Thai public officials in the smuggling of migrants from Myanmar or Cambodia, their recruitment process and the facilitation of their exploitation by fishing companies, frequently subjecting them to forced labour, physical abuse, withholding of wages and confiscation of Seafarer Identification Documents.

Diplomats may also be involved in modern slavery, most commonly in domestic servitude cases, as we explained in a post at EJIL: Talk! (Scenario 3). Domestic workers are particularly vulnerable to modern slavery as are migrants subject to labour brokerage who often have to pay recruitment fees leading to debt bondage. The involvement of the State may arise in that context in the way employment agencies function and in the practices permitted or prohibited by the State (Scenario 4).

The State may also be involved in modern slavery through export credit (Scenario 5). On 23 January 2019, the Supreme Court of Canada heard arguments in the case against Nevsun Resources for alleged complicity in forced labour in its Bisha mine in Eritrea. The focus of the case is corporate accountability, but it also raises questions on the monitoring of export credit and extraterritorial jurisdiction for human rights violations concerning for example a credit provided by EXIM, the Export-Import Bank of the United States, to Connell, a US company providing equipment to the Bisha Mine.

How can the international law of State responsibility help States to tackle modern slavery modern slavery more effectively? The answer to this question is unpacked in the legal policy recommendations (available in English, Arabic, Chinese, French and Spanish) that we presented at the UN Headquarters in New York on 31 January 2019 to States, international organisations and civil society (watch video). Information is available on the website of the project.

The first important step is to raise awareness on all existing international law mechanisms, including human rights mechanisms, to tackle modern slavery. States should use ILO mechanisms and should ratify, existing ILO Conventions. Two positive developments in this regard are the recent ratifications of the 2014 Protocol to the ILO Forced Labour Convention by Russia (17 January 2019) and Ireland (4 February 2019).

States have also committed to cooperate with each other and with the United Nations under Article 8.3 of the 1956 Supplementary Convention on the Abolition of Slavery, but this has not been used effectively in practice.

A key aspect in the fight against slavery is control over corrupt officials and enhanced monitoring of the public sector. In line with the independent review of the UK Modern Slavery Act, our legal policy recommendations emphasize that States should take steps to tackle corruption linked to modern slavery, enhance transparency and monitor human rights due diligence.

Another area of concern is the protection of victims and their access to justice. The recommendations focus on encouraging reforms of visa regimes and of the kafala sponsorship system to protect migrant domestic workers from becoming victims of modern slavery and to ensure a way out for victims. The recommendations also point out to promising practices such as those presented by the OSCE Handbook on domestic servitude in diplomatic households, or the model contract designed by the US TIP Office and New Perimeter. As the UN Special Rapporteur recommended in her latest report to the Human Rights Council, States should create ‘viable, accessible and non-discriminatory employment options for women’ (para. 82).

The recommendations also suggest concrete measures to ensure redress to victims despite the immunity that may protect the perpetrator, whether a diplomat or a State. Some of those recommendations encourage States to give a prospective waiver of immunity under certain circumstances and to revise employment laws so that overseas domestic workers can sue a State instead of the diplomat they work for. Other recommendations are addressed to courts, which are encouraged to explore new avenues for State accountability. In particular, courts are encouraged to develop the idea in the UK Supreme Court Reyes v. Al-Malki [2017] UKSC 61 to interpret the commercial exception to diplomatic immunity in Article 31(1)(c) Vienna Convention on Diplomatic Relations to cover exploitation of domestic workers. This would allow those courts of receiving States to hold accountable those diplomats involved in the exploitation of domestic workers.

All those recommendations have been formulated through the lens of State responsibility to provide additional tools to tackle modern slavery by preventing, identifying and monitoring the potential involvement of States in this phenomenon. If all those mechanisms fail, recommendations of last resort encourage States and international organisations to use sanctions, countermeasures and the invocation of State responsibility to ensure that those States involved in modern slavery are held accountable. A recent example of international pressure was the decision by the US Government to cut US trade benefits to Mauritania under the African Growth and Opportunity Act from January 2019 because, according to the US Administration, Mauritania has not made enough progress to end forced labour.

There is the illusion that slavery has been abolished because it has long been prohibited in law. In order to dispel this illusion and fulfil the commitment to fighting slavery under Sustainable Development Target 8.7, States should use all existing mechanisms at their disposal, including the international law of State responsibility.

Dr Philippa Webb is a Reader in International Law at the Dickson Poon School of Law, Kings College London, which she joined in September 2012 after a decade in international legal practice. She served as the Special Assistant and Legal Officer to Judge Rosalyn Higgins during her Presidency of the International Court of Justice (2006-2009) and, prior to that, as the Judicial Clerk to Judges Higgins and Owada (2004-2005). She was the Associate Legal Adviser to Prosecutor Luis Moreno-Ocampo at the International Criminal Court (2005-2006). Her publications include: International Judicial Integration and Fragmentation (OUP 2013), The Law of State Immunity (3rd edn, OUP 2013) (with Lady Hazel Fox CMG QC) and, The Genocide Convention: The Travaux Préparatoires (Martinus Nijhoff 2008) (with Hirad Abtahi). 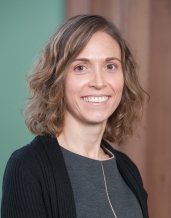 Dr Rosana Garciandia is Research Associate and Visiting Lecturer in Public International Law at King’s College London. Her work focuses on State responsibility for modern slavery and on the intersection between State responsibility and human rights. Dr Garciandia previously worked at international organisations in the areas of EU Law, human rights and international anti-corruption law. She was the Secretary General of the European Law Institute and worked at the United Nations Office on Drugs and Crime and at the EU Agency for Fundamental Rights.