The debate over conducting a UN led inquiry into the attacks on Syrian hospitals again brought the issue of dual object targeting to the forefront. This development followed an airstrike on a Libyan detention centre at Al Sabaa in July, 2019, in spite of prior knowledge regarding its coordinates. In both cases, the authorisers of the attack justified the strike on the ground that the centres were being used by the belligerent parties to store ammunitions, missiles and other weapon systems. As Kevin John Heller puts it, a ‘categorical prohibition’ on targeting might not be the solution, rather it would only lead to more incidences of flouting of IHL rules.

This post attempts to formulate certain rules in the event that such attack is the only militarily viable option.

Article 51 of the Additional Protocol I (‘AP I’) (‘distinction principle’), differentiates between civilian objects and military ‘objectives’. Article 52 of the AP I, explicitly prohibits attacks and reprisals against civilian objects. It defines civilian objects merely, as those which are not military objectives under paragraph 2. Military Objectives are defined as those objects which by their ‘nature, use, location or purpose’ provide an ‘effective contribution’ and whose destruction results in a ‘definite military advantage’. Destroying anything lower than this standard would be violative of the ‘proportionality principle’. The ‘precautionary principle’ further requires Belligerents to do everything to avoid or minimize the collateral damages arising from the attack. An attack should be suspended or cancelled if it becomes apparent that the objective to be targeted is not a military one or is entitled to protection (Article 52(3)). The problem however lies with the degree of protection afforded to ‘dual-use’ objects.

Neither the Geneva Conventions nor the Additional Protocols mention the term ‘dual-use’. They are understood as objects serving both, civilian and military functions. Several jurists concede that once a civilian object concomitantly acquires a military function, it becomes a legitimate target under IHL. Shue and Wippman argue that these objects give rise to an ‘extraordinarily permissive’ use of lethal force. Marco Sassoli argues that while an attack on a dual use object would be unlawful if the harmful effects on its civilian objects are intended, respect for this rule is generally lost in ‘the heat of the battle’.

However, another set of jurists argue that the degree of protection is relative to the degree of duality and ‘military necessity’. The latter must be definite and not hypothetical or assumed. This would require an assessment of the relative military value the object poses to the enemy against the collateral effects that its destruction would pose to the civilian population.

What Strategies could be adopted?

During an ongoing conflict, it is possible for belligerents to make errors in their assessment. The crucial question is, before attacking, what is the level of certainty that must be required? Or what quantifiable amount of ‘doubt’ as referred under Articles 50 and 52(3), is required to allow the benefit of doubt?

The attacking party has an obligation to obtain all information that can be ‘reasonably achieved’ while the opposing party must also use methods, apart from marking protected locations, to bring the true nature of the object to the adversary’s attention. Cordula Droege notes that Article 51(5)(b) of AP I uses the words ‘may be expected’ which means that before taking targeting decisions, even long-term foreseeable damages arising from the object’s destruction must be considered. For instance, in the context of power grids, former air staff officers have stated that repeated attacks on the grids prevent repair and keep the facilities out of action and hence possess consequences for the civilian population.

This standard of foreseeability has to be measured from the perspective of a military commander and not a ‘reasonable person’ (See, state practices in the US and Israel). Even though it could be said that a military commander motivated by the circumstances of war could consider something as innocuous as a desolated ground previously used for storing arsenal as offering ‘military advantages’ through its destruction, this would still be a better alternative. This standard is considerably higher since it involves both subjective as well as objective considerations (Enzo Cannizzaro, Proportionality in the Law of Armed Conflict, inThe Oxford Handbook of International Humanitarian Law340 (Paola Gaeta and Andrew Clapham eds., OUP 2014)). For example, a ‘reasonable person’ may not foresee that cutting off electric supplies would result in cutting off life-saving facilities at the hospital or fresh water supplies; that lack of fresh-water supplies might result in famines and starvation deaths; that destruction of dams may eventually result in the spread of waterborne diseases, and so on. However, a military commander by virtue of his experience would be in a position to know about the interconnectedness within the infrastructure grids and the far-reaching effects of destruction. If the object to be targeted forms part of a larger and significant network or critical infrastructure, autonomous weaponries such as drones could be used to precisely target only the sub-stations or electrical lines, instead of generating stations or hydel power stations. In the course of making decisions, they could consider factors such as the present situation within the area, the number of attacks previously undertaken, the length of time it could take to repair the damaged objects and the injuries that could result in the meantime (Boothby, Weapons and the Law of Armed Conflict414 (OUP 2009))..

Targeting decisions should be made on a real-time basis and to that extent, wherever conventional weapons or methods would ensure better recognition of targetable objectives, they should be used. For instance, direct and on-ground verification of targets or flying aircrafts at lower altitudes could reduce chances of arbitrary targeting.

The belligerent parties could also identify and classify dual-use objects, in increasing order of the military advantage to be obtained from their targeting (See, the US practice of classifying belligerent targets into three categories). Where there is no impending necessity, states could use surveillance techniques over a length of time to assess the significance and status of the dual-use objects. While classifying, the belligerents should ideally exclude incidences where the objects are used for defensive operations and instead focus on offensive operations. For example, the facilities that deploy missile detection and response systems that serve purely defensive functions, could be exempted from attacks. The warring parties could also make a distinction between instances where there is a simple misuse of the objects, mere presence of armed men inside the facilities or mere storage of arms and ammunitions, against instances where the dual use facilities are being used to launch attacks. Where the collateral loss to the civilian population would otherwise be high, States that are equipped with autonomous technologies could make attempts to avert offensive attacks through ‘autonomous embedded enhancements’ or corruption of the attacking party’s sensor systems, before itself resorting to an offensive launch.

Agreements between warring parties, are not foreign to IHL. In the recent past, warring parties have entered into agreements for the establishment of ‘safe zones’ and ‘buffer zones’ towards the de-escalation of conflicts and facilitation of humanitarian access to civilians. It is proposed that the parties should take agree on establishing these ‘safe zones’ around areas that lie within close range of objects that are irreplaceable and of great value to the civilian population.

This post was necessitated by the fact that, while much ink has been spilt on discussing the principle of distinction with reference to civilians, there has been considerably less attention paid to the standards to be adopted while confronting dual-use objects. In their recently published work, Gordon and Perugini called for an absolute prohibition on targeting medical units. They argue that medical facilities occupy a rather borderline position by catering for both, the civilians and the injured.  However, by that rationale, such ‘life-enabling and war-making’ activities could equally be performed by other dual use objects such as electricity grids and water installations that act as essential services to sustain life. Moreover, unlike health units which can be mobile, relocation is not feasible in the case of the latter objects. As against an ‘absolute prohibition’ on all attacks, the proposed strategies could help in ensuring greater compliance and strengthening of IHL provisions.

Ishita Chakrabarty is currently in the final year of her BA.LLB (Hons.) program at 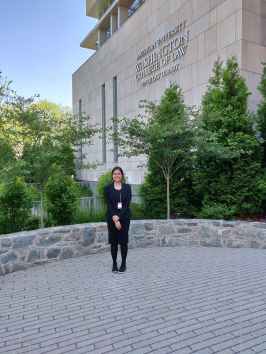 Hidayatullah National Law University, Raipur, India. She holds a penchant for International Humanitarian Law and International Criminal Law. She has previously authored and published papers with the Queen Mary Law Journal and the Penn Undergraduate Law Journal and has had the opportunity of interning in the capacity of a student researcher with Justice Indu Malhotra, Judge, Supreme Court of India and at the Commonwealth Human Rights Initiative, Delhi.